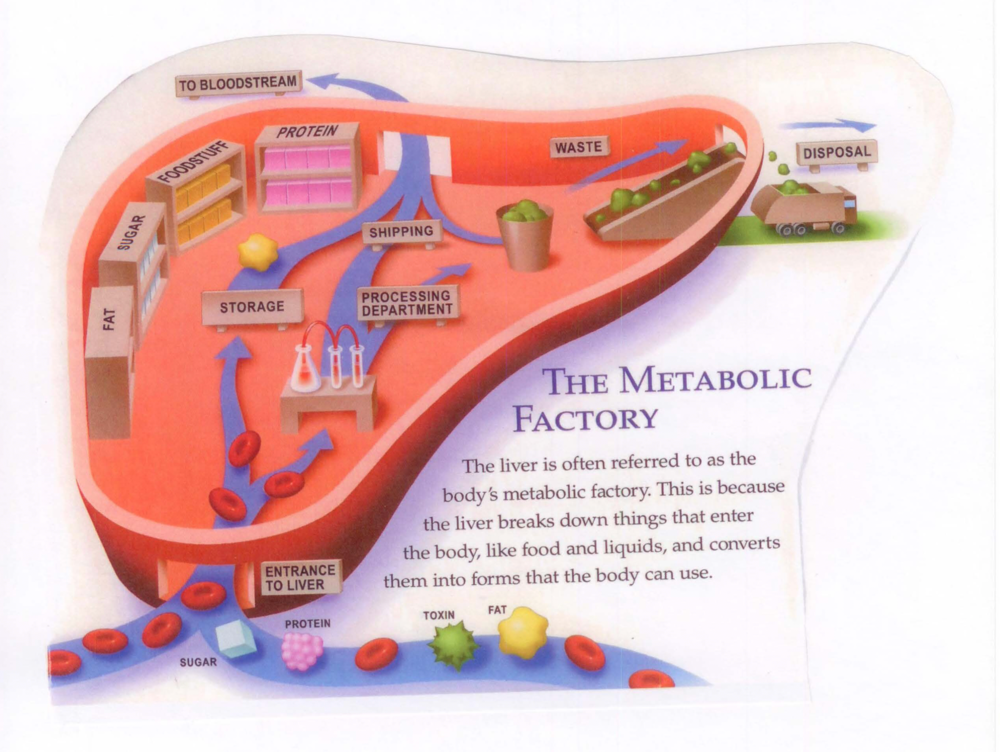 The liver is one of the top 5 most important organs however, Western symbolism of the liver would not lead you to suspect this. In Western culture, there is a very popular saying “What am I, chopped liver?” This is interpreted as saying “Do not treat me as a side dish (chopped liver), I am the main course.” This implies that a person feels as though they are being treated as insignificant. This is a stark contrast to the various Eastern symbolism of the liver. In middle eastern cultures, the liver also signifies courage, endurance, perseverance, and desire. There is a saying, “you are my liver,” which is interpreted as you are my dearest friend or life blood.

Ancient Eastern cultures, such as the Babylonians, Hebrews, Greeks, Romans, Assyrians, etc., regard the liver as the seat of life or the area where the living soul is found. There is also a strong belief that a person’s fate is written on the liver by the Gods. Therefore, shamans of the past would sacrifice an animal for liver divination (fortune telling). The liver being the center of emotional and mental activity is in striking contrast to Western cultural association of emotional and mental activity coming from the heart (love) or brain.

In Greek mythology specifically, the liver is regarded as the location of one’s passion, emotion, anger, and wrath. There are several myths where the Gods, specifically Zeus, have condemned another to have their liver eaten from their body by a beast every day, whilst regenerating overnight, for the rest of time. This punishment signifies the destruction of one’s passion to fuel Zeus’s power and wrath.

Overall, the liver is very important for processing nutrients and toxins. It also has the amazing ability to regenerate itself when damaged. Western cultures have regarded the liver as an insignificant side dish. Eastern cultures have regarded the liver as a center for emotions, power, and fate. While neither are based on the workings of the liver, I think we can learn a lot about different cultural perspectives by simply comparing the symbolism of the liver across the globe.

The liver is a solid organ, in fact it is the largest internal organ in your body. This size of the liver is about 8 inches across, 6.5 inches high and 4.5 inches thick, and it weighs about 3.5 pounds. The liver is located on the right side of your abdomen just under the rib cage. The liver performs many vital life sustaining functions such as, digesting and processing food and distributing nutrients, as well as ridding the body of toxic substances.

What is liver disease?

Liver disease can be thought of as an injury to the liver. There are many different causes of liver disease, the most common are, viruses, Autoimmune disorders, excessive alcohol use, genetics, lifestyle - eating a poor diet, lack of physical activity and or obesity. Reaction to medications, taking large amounts of herbs and supplements, street drugs or toxic chemical exposure. The injury may be short term an acute medical problem and possibly reversible or it may be a lifelong chronic medical problem.

Many people with liver disease feel okay and do not look sick. Early diagnosis is very important and may prevent serious liver damage. The liver may possibly be healed with a well-managed treatment plan. Liver disease can progress from a healthy liver to inflammation/hepatitis to scarring/fibrosis to severe scarring/cirrhosis, to liver failure and liver cancer. The progression of the liver disease looks the same regardless of the underlying cause.

What can you do to prevent damage to your liver?

Start with a healthy lifestyle by eating a healthy diet and exercising regularly. Eating an unhealthy diet can lead to liver disease. Limit the amount of alcohol you drink or stop drinking alcohol. Alcohol can damage or destroy healthy liver cells. Manage your medications and supplements by speaking with your medical provider or pharmacist regularly. If you have diabetes or other medical problems optimize your care by following the plan from your providers or other health care team members. Try to avoid exposure to toxic chemicals from aerosols products, insecticides, and other potentially harmful chemicals. If you smoke or use tobacco products there may be harmful additives that can affect your liver. Speak with a medical provider to assist you to stop smoking, vaping, or chewing tobacco. Stay up to date on all vaccinations. See your dentist regularly and follow up on all medical appointments.

Chronic liver disease is when liver functions deteriorate progressively. Liver functions include the production of clotting factors and other proteins, detoxification of harmful products of metabolism, and excretion of bile. There are many liver diseases and conditions that each may have different causes. However, many of the symptoms seen in liver disease are similar. Sometimes, no symptoms are seen, and liver disease is found because of routine physical exams. Other times, patients may experience nonspecific complaints such as fatigue, anorexia (loss of appetite), and weight loss or they may have symptoms related to the cause of the liver disease. Below, we will discuss common signs and symptoms of some of the most common liver diseases that are seen in our office.

Generally, Nonalcoholic fatty liver disease (NAFLD) and Nonalcoholic Steatohepatitis (NASH) are “silent diseases” with no symptoms. If symptoms are seen, tiredness and right upper quadrant discomfort are the most common (National Institute of Diabetes and Digestive and Kidney Diseases (NIDDK), 2021a).

Autoimmune hepatitis (AIH) can present with fatigue, nausea, joint pain, poor appetite, jaundice, lightening of stool color, and darkening of the urine color. Symptoms may be mild to severe and may not be present in the beginning, though they can appear after diagnosis also (NIDDK, 2018a).

Alcoholic Liver Disease (ALD) can appear like NAFLD/NASH and can be asymptomatic until cirrhosis occurs. Sometimes, an enlarged liver occurs. About 20% of alcohol consumers develop fatty liver. Inflammation of the liver due to alcohol consumption, alcoholic hepatitis, can present with an enlarged liver, nausea, vomiting, and abdominal pain. Jaundice, fever, bleeding, and liver failure may also be seen (Mann, et al., 2003).

Primary Biliary Cirrhosis (PBC) is believed to be an autoimmune disease in which the small bile ducts of the liver become inflamed and can eventually be destroyed. Common symptoms include fatigue and generalized itching of the skin. As the disease worsens, fatty deposits in the skin, often near the eyes, called xanthomas, can be seen. PBC can also be seen when other autoimmune diseases are present already (NIDDK, 2021b).

Primary Sclerosing Cholangitis (PSC) shares the same typical symptoms as PBC. Other symptoms can be weight loss, poor appetite, fever, and discomfort in the abdomen. Often, because this disease progresses slowly many do not have symptoms for years (NIDDK, 2018b).

Hemochromatosis is a build-up of excessive amounts of iron that can cause damage to the liver. Often, symptoms do not occur until about 40 and women generally have symptoms 10 years later than men. Common symptoms seen are weakness, fatigue, joint pain (knees and hands most commonly), Loss of sex drive or erectile dysfunction, and darkening of the skin color (NIDDK, 2020).

Drug-induced liver injury (DILI) can resolve quickly with the stoppage of the medication, herbal/homeopathic supplement, or over-the counter medication. Symptoms include fatigue, nausea, weakness, itching of the skin, and jaundice. Some cases may also have abdominal pain (David & Hamilton, 2010).

Alpha-1 Antitrypsin deficiency (AATD) can damage the liver by allowing a build-up of abnormal alpha-1 antitrypsin proteins in the liver, where they are created. Often, symptoms may not be seen until the ages of 20-50 years. AATD can also affect the lungs. Therefore, some of the symptoms seen are related to the lungs such as shortness of breath on exertion, wheezing, recurrent respiratory infections, and even a diagnosis of emphysema. Other symptoms include jaundice.

Although this is not a complete list of liver diseases, many of the most common ones are discussed. If you have signs and symptoms of liver disease, evaluation by a hepatologist is recommended. With early detection and treatment, complications such as cirrhosis, liver failure, and more may be prevented. 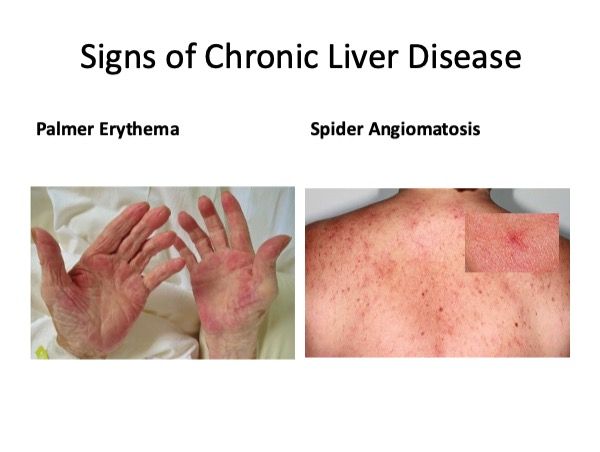